The Stephanies. Also, a NaNoWriMo excerpt.

I got mail last week!

Three parcels in one day, in fact, on what happened to be my flatmate's birthday. And she got no parcels.

Here's one of my parcels: 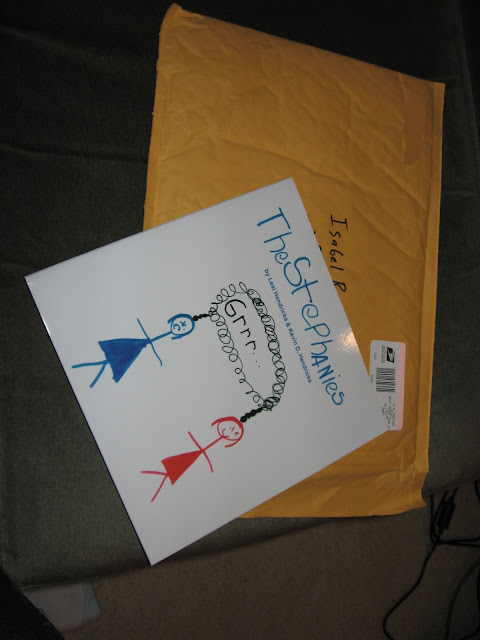 This little gem is an example of 'Kickstarter swag', or, if you want to be more formal, 'goods obtained from Kickstarter'. For the uninitiated, Kickstarter is a funding platform for creative projects. People put up projects they intend to complete, and people can choose to contribute towards their funding in return for rewards. I was browsing to see what projects people had put up, and came across The Stephanies, a book which a father and daughter had created together.

I don't know Kevin and Lexi at all. Heck, I don't even live on the same continent as they do. But I felt compelled to be part of this project. Why? Well, to start with, because I think writing is awesome, and it's awesome that a six year old has made a book. I remember when I was that age and we would write stories in our writing boos at school and then 'publish' them on a sheet of coloured paper. The paper which was folded in half so you could make a cover as well. One time I wrote a lengthy (it seemed then) version of Cinderella which was far too big for such simple publication. Instead, I got to staple multiple pages of larger pieces of paper together to publish my story. It took a really long time. My teacher was pretty impressed and I got to go and show the Principal who was also pretty impressed and gave me a 'highy commended by the Principal' stamp in reward.

So I wondered ... if I thought it was pretty cool to have my Principal look at my book and give me a stamp, how cool would another young writer think it was to have a real, live, published book which strangers on the other side of the world are reading?

Speaking of, here's a picture of me reading on the other side of the world. 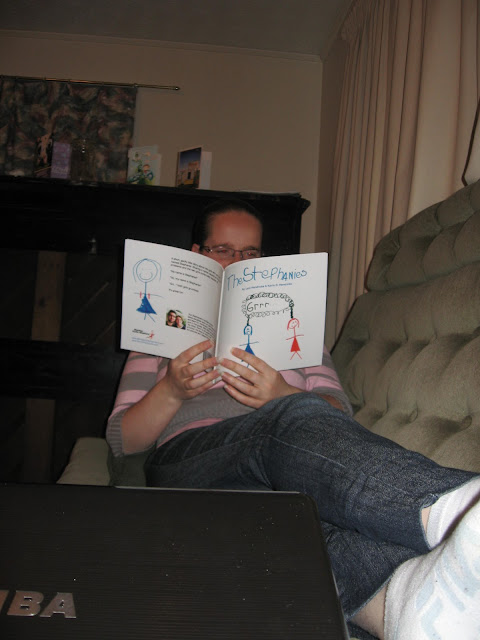 I like how my feet look bigger than my head.

I was not disappointed with this book at all. It's a cute, engaging story with a great twist at the end. Which I'm not going to spoil for you because that would be evil. The pictures, drawn by Lexi, are charming. The story is about two girls who are both named - that's right - Stephanie. And are they pleased about it? They certainly are not!

Do you know how confusing that's got to be? I don't often meet people with the same name as me unless they are really old people, or babies. So I don't usually run into the same problems as the Stephanies do, such as being in the same class and not knowing who the teacher is talking to.

Actually, I lie. In fifth form geography I sat next to a Liz. Our teacher would frequently call on 'Elizabeth'. We'd look at each other - she was known as Liz, though her real name was Elizabeth, and I often get people mistaking 'Isabel' for 'Elizabeth'. So this was confusing, and we didn't know who the teacher was talking to. But we never got as grumpy as the Stephanies do!

If you want to know more, check out Amazon.

In other news, NaNoWriMo is progressing well! I'm not writing as fast as I have in previous years, just trying to get the 1667 words each day. I've continued to be very good at procrastinating and made this cover: Made from a photo by Lauren Manning. I'd pick this book up in the store.

And to prove that I have actually done some writing, here's a short excerpt. As always with NaNo it is in its unedited, non-proofread glory:

Aiofe remembered to close the front door more quietly than she had opened it when she’d come in. ‘Hold my hand,’ she instructed Katie, feeling grown up as she always did. ‘At least until we’re across the road.’
Katie did, looking down at Mr Twinkles beside her ‘And you hold onto my hand, Mr Twinkles.’
‘We’re going explor-ring!’, Aiofe sang, as they walked down the street. ‘And we’re gonna find some land, and we’re gonna make a town, and Dad is gonna make dinner, and we are gonna meet our guest.’
‘We’re gonna meet Stella’, Katie joined in.
‘Have you met her already?’
‘Uh-huh. She’s nice. And she has an earring in her nose.’
‘That means it’s a nose ring.’
‘Well it looks like an earring to me.’
‘Look both ways before we cross the street’, Aiofe instructed, as she always did. And as always, there was no traffic to be seen. ‘Okay, go.’ The girls ambled over the road, where they were met by a steep and muddy path.
‘It’s dirty’, Katie grumbled. Aiofe rolled her eyes. She didn’t understand her sister’s problem with dirt - it washed off, and who cared if you got dirty as long as you were having fun.
‘You’ll come clean later when you have a bath. And Dad will wash your clothes.’
Katie hugged her bear to her chest. ‘I don’t want Mr Twinkles to get dirty though’.
That was a problem. He was a bit harder to wash than clothes were. Aiofe thought of her own teddy bear, Lord Carrigan Beary. He had been in the washing machine many times, her mother insisting that it was like a playground ride for him. He may be having a great time, but he seemed to have less fur each time he came out of the machine.
‘I have an idea’, Aiofe told her sister. ‘Here, give me Mr Twinkles’.
‘Be careful’, Katie said suspiciously, holding onto the bear a few seconds longer than necessary as she handed him over. Aiofe took great care as she unzipped her jacked, held the bear to her chest, and zipped her jacket back up again so that only his head could be seen sticking out.
‘How about I carry him like this?’
‘Okay’, Katie agreed slowly. ‘Don’t fall over. He might get muddy if you do.’
‘I won’t fall over!’ Aiofe declared. ‘I am the great explorer, the brave knight, Madame Bellamy Brown. I come. I conquer. I do great things. But I certainly do not fall over.’
Katie giggled. ‘Okay, Madame Belly Brown.’
‘Bellamy Brown.’
‘I know.’
Aiofe smiled. ‘Now, onward! We must overcome this hill, come over to the top of it, so we can see what lies within this new district.’ Katie didn’t move. ‘Onward means you can start walking now.’
‘Oh! I get it.’ And the sisters began a climb up the hill. Aiofe wondered who panted more coming up this hill, Katie now or Ben when they ad the other day, but she realised that was a nasty thought and pushed it aside. Not everybody could be athletic, and Katie was only four. Besides, you couldn't really think anything bad about Ben - he was too nice all the time.
They staggered up to the lookout, and sat down on the bench. ‘Why, someone has been here before us!’ Aiofe exclaimed. ‘And put a bench here. And some signs. Well, that’s very helpful. Now, where should we make camp for the night?’
Katie pointed. ‘That house, with the blue roof.’
Aiofe looked at the house Katie pointed at. If she squinted she could see her father through the kitchen window. ‘An excellent choice.’